The Rainbow Chorus is Brighton & Hove’s only non-audition LGBTQ+ choir, and the only one in the South outside of London. 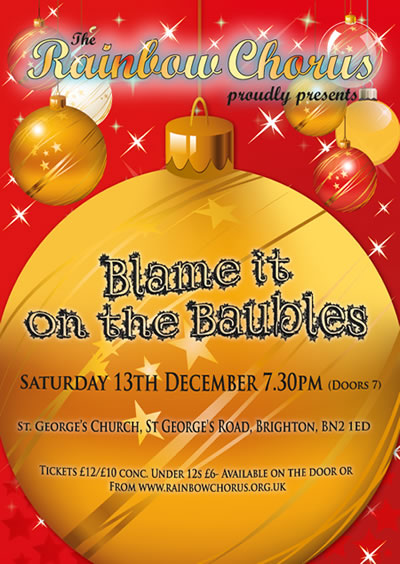 THE CHORUS has come a long way since its early days under the direction of Carl Boardman and is presently on an upwards curve, producing a much bigger musical sound which has brought a fresh new confidence to their overall performance.

Of all the LGBT choirs in Brighton, the Rainbow Chorus don’t have the strongest individual singers but they collectively sing together in ensemble as well as any of the other LGBT choirs.

Their love of singing is infectious and now that their tenor and bass sections have been beefed up there is a new confidence to their ensemble singing. The percussive nature of their pianist’s accompanying style has also improved the choirs attack and confidence.

Their Christmas show was nicely programmed and included an opportunity for the audience to get involved singing Christmas Carols Hark the Herald Angels Sing and O Little Town of Bethlehem and Christmas songs Santa Claus is Coming to Town and Winter Wonderland.

Each number during the evening was well presented and my only criticism is that is was a bit tough on the new soloists featured in Pie Jesu to put the piece so early in the programme when the singer were still settling down and clearly nervous.

I loved the arrangement and performance of Hallelujah. It showed the choir well as did Where you there? which had been given new words by Anessa Chaudhry highlighting Hate Crime. It worked very well.

Fairy Tale of New York caught the imagination of the audience who swayed along in time to the chorus who clearly enjoyed singing the number.

Jingle Bells, Santa Claus is coming to Town and Oh Holy Night were all given solid energetic performances which helped add to the general Christmas spirit of the evening.

My own favourite number on the night was Autumn Leaves and Fly Me To The Moon where the mash up of the two songs was beautifully handled by Aneesa.

Shenandoah was once again the musical highlight of the concert as it was at the Aids Day Concert the previous week. The choir really understands how to handle these traditional numbers and the music brings out the best performances from the Chorus.

The more commercial numbers including I Believe I Can Fly, I Want You Back, Blame It On The Boogie and True Colours were very well performed and huge favourites with the audience.

For a chorus who have a no audition policy it is a great challenge for a musical director to bring out consistantly good performances across a range of music idioms. Anessa Chaudhry has done a great job in getting a good sound out of the singers and is ably assisted by her accompanist Mojca Monte.

I look forward to hearing the next concert when the full intake of this years new singers will be ready to sing in the public performances.