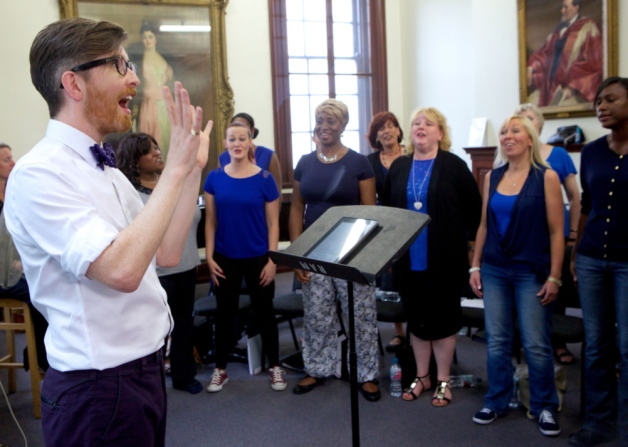 If there’s one thing that’s guaranteed to lift my mood on a Thursday night, it’s belting out a rousing chorus of ‘Money, Money, Money’ by ABBA.

And ever since I joined the Horsforth community choir last year, that’s exactly what I’ve been able to do.

I’d made attempts at joining choirs in the past – but never with a great deal of success.

When living in Brighton I was desperate to break out my wobbly soprano.

There was one choir in particular which always seemed to be having a good time. They sang the coolest songs, wore the most stylish clothes and squashed flat any whiff of the ‘stuffy middle-aged do-gooder’ vibe of some singing groups (which I associate with the aroma of Shake ‘n’ Vac in a town council meeting room).

Sadly though, as a straight woman I feared I was unlikely to be welcome in Brighton’s Rainbow Chorus – however spectacular my rendition of ‘Don’t Stop Believin’’.

I thought long and hard about trying to ‘pass’ as a lesbian…studiously avoiding use of personal pronouns when talking about my ‘partner’; digging out some of mum’s Greenham Common memorabilia, expressing a preference for the early albums of kd lang…

But then I realised there was something fundamentally creepy about a straight person infiltrating a gay choral group under false pretences.

So I waited till I moved to London before acting on my urge to join a choir.

Soon after moving, I saw an advert for a Baptist gospel group and got all excited – picturing myself waving my arms and fanning my face with dramatic abandon while channelling my inner Aretha (just like that scene in The Blues Brothers where Jake and Elwood are struck by the realisation they’re on a mission from God).

When I turned up one drizzly Monday night, however, I was disturbed to discover my fellow choristers bore no resemblance to James Brown’s magenta-robed chorister crew.

There was a very slight Japanese teenager, an old man with the most enormous purple nose I’d ever seen, a middle-aged woman wearing a sweatshirt emblazoned with The Archers theme-tune (which highlighted to tragic effect the pendulosity of her bosom) – and me.

Rock the joint, we did not. The greatest hits of gospel were mangled into unrecognisability by our unmelodic mouths.

It was excruciating. But still I persisted. Why?

Research recently presented at the British Psychological Society’s annual conference highlighted real benefits to singing in a choir. Oxford Brookes University academic Nick Stewart polled 375 people who either sang alone, were members of a choir, or members of a sports team, about their psychological wellbeing when engaging in their chosen activity. Although each group experienced a boost in wellbeing, the choir-members enjoyed the greatest effect.

Believe it or not, this research is now being translated into therapeutic reality – in the workplace.

Earlier this month I attended a conference on health and wellbeing at work where it was suggested that managers should set up singing groups in offices and factories across the UK. Potential benefits included enhanced team work, uplifted mood and improved ability to manage stress.

I’m not sure how I feel about breaking out into song with my colleagues (we can barely cope with ‘Happy Birthday’…).

But I’m so glad I’ve finally found a choir I feel comfortable with.

It’s not a cool group, like the Rainbow Chorus. There’s no hint of hand-clapping or fan-waving. And I’m almost the only one there who isn’t eligible for the pensioners’ reduction in class fees.

But every Thursday night I love to lose myself in learning new songs and belting out old favourites. We giggle when we get it wrong, and grin when the choir leader praises us. And when our harmonies come together, the songs soar above the everyday grind and carry us somewhere else entirely.

This website uses cookies to improve your experience while you navigate through the website. Out of these, the cookies that are categorized as necessary are stored on your browser as they are essential for the working of basic functionalities of the website. We also use third-party cookies that help us analyze and understand how you use this website. These cookies will be stored in your browser only with your consent. You also have the option to opt-out of these cookies. But opting out of some of these cookies may affect your browsing experience.
Necessary Always Enabled

Any cookies that may not be particularly necessary for the website to function and is used specifically to collect user personal data via analytics, ads, other embedded contents are termed as non-necessary cookies. It is mandatory to procure user consent prior to running these cookies on your website.